Surf Science: Why do Waves Break?

WHY DO WAVES BREAK?

As we head into wave season in South Florida, we thought we would get back to the basics. Join us every Wednesday for our Wednesday Waves post as we discuss the ocean we love and the waves we love to surf. So, first things first, what makes a wave break?

It's simple, waves are generated by wind. Water out in the open ocean would be flat and smooth like the surface of a still lake in the morning if it weren’t for wind. Offshore storms create winds that blow on the surface of the ocean. This wind creates ripples.

Isobars, or the lines on the map, show winds

The wind can be seen on weather maps as low pressure areas. These low pressure areas are shown as lines on a weather map (see left) called "isobars". The more tightly packed the isobars are on the weather map the stronger the winds will be. Small waves, called capillary waves, start to form in the direction that the wind is blowing.

How does wind create waves?

The stronger and longer the wind blows, the more effect it has on these ripples and the larger they become. Initially the waves look just like small chop, but this chop can soon increase in size. As the wind continues to blow, the smaller waves can increase in size. The wind will get hold of the small waves much more easily than the calm sea surface. Since the wave size is dependent on the wind speed generating it, wind speed directly affects the wave size. Once the largest waves that can be generated for a given wind speed have formed, the waves called ads or fully developed seas.

As waves come into shallower waters, either closer to a shore or near a reef or sandbar, the wave energy and the decrease in water depth pushes the wave upwards. When this happens, the back of the wave begins to move faster than the front. When the wave becomes too high, it breaks. (See photo to the left)

The breaking of waves is studied by fluid dynamics; a sub-discipline of physics that studies the science behind liquids and gases.

There are four basic types of breaking waves: spilling, plunging, collapsing, and surging. 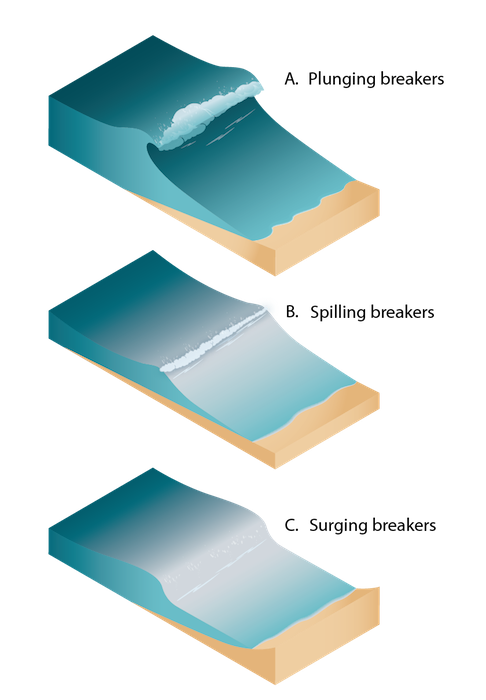 Spilling waves are gentle waves with crests that break softly towards the shore. These waves break when the ocean floor has a gradual slope.

Plunging waves break when the ocean floor is steep or has sudden depth changes. This is where you can get sweet barrels or enormous close-outs.

A collapsing wave is a mix of spilling and plunging waves.

Surging waves are the result of long period swells. As a result, the wave is slow, the faces are smooth and oblique, and the crest barely exists. These waves may not break at all. Breaking waves have a deep trough; surging waves do not.

As the waves travel farther away from the original wind source, they start to organise themselves into swell lines. "Wave trains" form and these inevitably hit the beach at the same time. These are what surfers call sets. Waves that are no longer affected by the wind that generated them can be referred to as ground swell. These are gold for surfers.

WHAT AFFECTS THE SIZE OF SWELL IN OPEN OCEAN?

There are three main factors that affect the size of a wave in the open ocean.

WHAT AFFECTS THE SIZE AT A CERTAIN BREAK?

There are different factors affecting the wave size at a certain surf break.

So, know you have some of the basics under your belt. Stay tuned for our next #WaveWednesday when we will discuss how different ocean bottom affect the waves you surf.